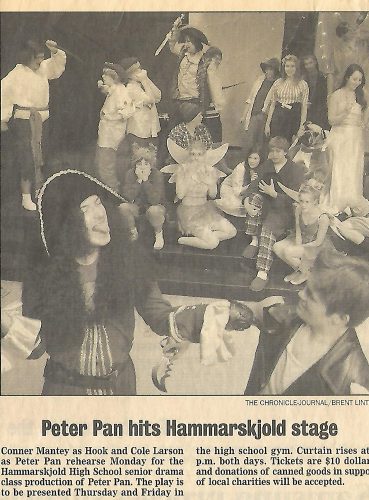 Welcome to Cole’s Notes Blog! Today’s entry, I’m going to talk about the early years of my singing training and the moment that nearly ended my career choice before it began.

When I first started taking private lessons for singing at the age of nine, I could never have imagined I would end up where I am now. At that time, I came to a realization during a local production of Chicago. I realized if I wanted to play lead characters that I desired the most, I would need to be able to sing properly. After seeing an advertisement in the show’s program, I urged my parents to take lessons with Denise Krawczuk.

I went to her studio that was above an old music store at the time, with no idea what to expect and quite nervous. After the first fifteen minutes, Denise made me feel confident in the new learning environment I was in, instructed me how to properly breath when singing and gave me my first steps to truly sing with my own voice than just sing along to the Disney Sing-Along videos I used to watch.

By the time I was twelve years old, I felt a newfound confidence in myself that was never there before and I asked my grade eight homeroom teacher to sing in front of my class. At the time, I felt the results would end with a heckling similar to that of a bad stand up comedian and I was more nervous than ever before. I shook the entire time I sang to Frank Sinatra’s “Fly Me To The Moon”. After the track ended, I waited for the reception, and it was actually filled with applause and adoration from my fellow classmates. My teacher praised me for my courage to sing in front of my classmates and that was the first time I felt like I was able to take my passion for singing farther.

It practically happened overnight, where my voice that once sounded like a regular young boy’s tenor range hit absolute rock bottom. I remember how my mom called the house from her cell phone, I answered the phone, and my voice was so deep that my mom thought I sounded like my dad. It translate to similar problems during singing lessons with Denise. The notes I could once hit with ease became non-existent at that point.

I became confused, upset and frustrated that this would happen and nearly considered stopping my singing training all together. It was then that Denise became more of a parent role model than just a teacher and helped to encourage me to push through the struggles of puberty’s effect on my voice and to find discoveries of the lower range of my voice that I never had before.

I will go on record and say that this period of my life was the toughest for me, but with the continual support of Denise and my parents, I not only conquered any doubts and insecurities about my abilities as a singer, I also discovered the best support to push me to take my vocal development further than I could have dreamed and learned that any low point in one’s life can be overcome with two things: a positive attitude and a strong desire to never give up.